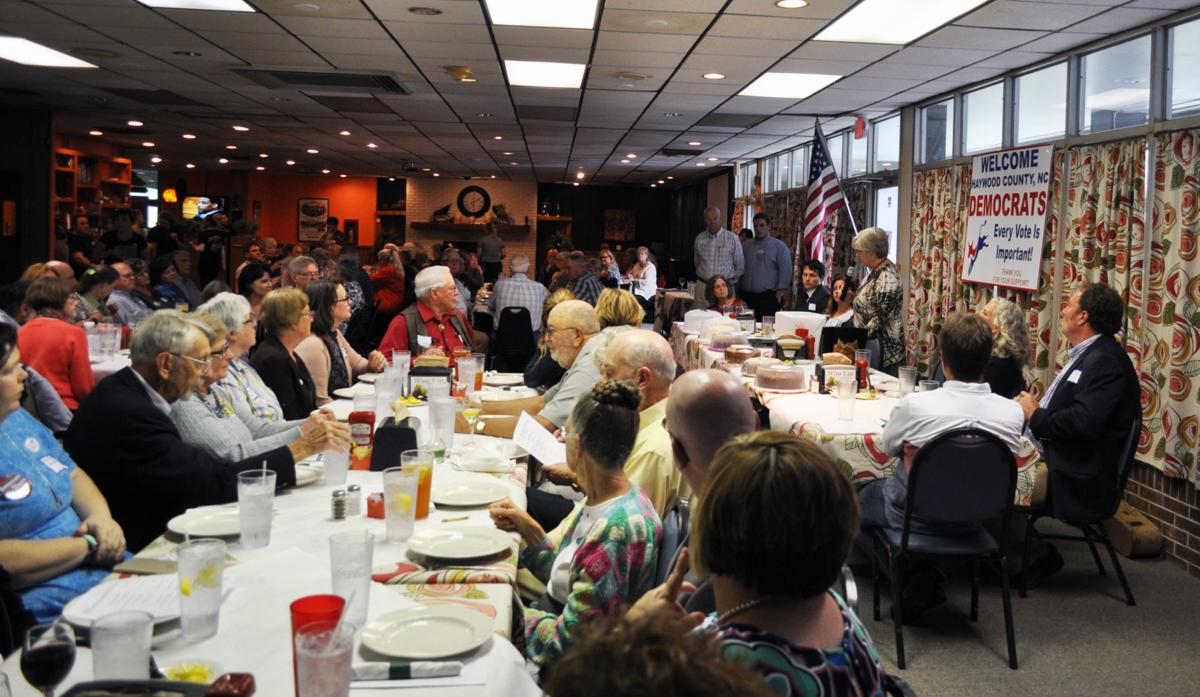 The Haywood County Democrats held their annual rally in Maggie Valley on May 23.

Democratic National Committee member Cliff Moone delivered a keynote address to an overflow crowd of Haywood County Democrats during their Spring Rally at the Maggie Valley Inn on Tuesday, May 23.

MAGGIE VALLEY — Democratic National Committee member Cliff Moone delivered a keynote address to an overflow crowd of Haywood County Democrats during their Spring Rally at the Maggie Valley Inn on Tuesday, May 23.

Moone, who was elected to the DNC by the N.C. Democratic Party State Executive Committee in 2016, speaks from extensive political experience. From his first position as president of a Young Democrats group, Moone served in many leadership positions in the party, including precinct chair, Catawba County Democratic Party chair and 10th Congressional District chair.

Moone began his address Tuesday evening by outlining some of the important changes being made by Chairman Tom Perez at the Democratic National Committee to make the DNC more responsive and effective and rebuild the Party to win from the courthouse to the White House.

A retired pastor, Moone, told the crowd that he had also come to Haywood County to “preach a little Democratic gospel.”

“I don’t have the time tonight to talk about all the things that Senate President Pro Tem Phil Berger, House Speaker Tim Moore and the rest of that Republican crowd in Raleigh are doing to take N.C. backwards and hurt opportunity for working people in our state,” he said. “These folks continue to undermine public education and seem far more interested in tax cuts for corporations and the wealthy than supporting the needs of our school children. That’s why they pass fear-mongering bathroom bills and big tax cut budgets for the rich in the middle of the night.”

He said that if it weren’t for Democrats like Joe Sam Queen, Terry Van Duyn, Susan Fisher, John Ager, Brian Turner and others, “there is no telling what Republicans would try to get away with.”

Several candidates for the 2018 general election addressed the crowd, including Phillip Price and Matt Coffay, who have launched campaigns for the 11th Congressional District seat currently held by Rep. Mark Meadows; and Michael Sorrells who is running for re-election to the Haywood County Board of Commissioners.

Canton Alderman Zeb Smathers led the group of municipal candidates who will be on the ballot in November and introduced Kristina Smith who formally announced her candidacy for Canton alderwoman.

“It’s really exciting to see this many people engaging so early in the election cycle,” said Campbell, in her introductory remarks.

View all posts by connienicholson